THE SUNDERLAND FLYING BOATS OF LAKE UMSINGAZI
By Jeff Gaisford
Jeff Gaisford has a deep interest in the flying doats which operated in Zululand and this led to the writing of this article. It first appeared in World Air News and is reprinted here with kind permission.
262 Squadron RAF used Catalina Bay at the southern end of Lake St Lucia as a forward operational base in 1943 and ‘44.  Initially they flew the sturdy Catalina flying boats, but these were gradually replaced by much larger four engined Short Sunderland Mark 5 flying boats. These drew over five foot of water and St Lucia was too shallow for them. This forced the Squadron to look for an alternative landing site with deeper water. They chose Lake Umsingazi at Richards Bay, and the squadron relocated there lock stock and barrel in the course of 1944.  In 1945, there being so many South Africans on strength in 262 Squadron, it was decided to transfer the whole operation to the South African Air Force. This was duly done and 35 Squadron SAAF came into being. The squadron base was at Congella in Durban and this required the big flying boats to land in the harbour. They were forbidden to land there at night, however, due to various after dark hazards that included the large number of small “fishing”craft, and the flying boats had to land at Lake Umsingazi.

A 35 Sqn SAAF Sunderland with the registration letters RB-N crashed and sank there on the night of 1 November 1956 in bad weather after a navigation exercise to Europa Island in the Mozambique Channel.

A young crewman, 18 year-old Henry van Reenen, survived the crash and, now a respectable businessman in Gauteng, recently told me his tale:
“Three Sunderlands flew on the navigation exercise from Durban to Europa Island – their serial numbers were RB-D and RB-N which was the aircraft I flew in. I cannot recall the registration of the third one. En route our radar set failed. Great waterspouts were rising all around us, forcing us to dodge backwards and forwards and it wasn’t long before our navigators had no idea where we were. Without radar we were almost blind.

The other two Sunderlands completed the exercise, turned for home and landed safely at Lake Umsingazi. We eventually packed it in in the late afternoon and headed back towards the South African coast. A thunderstorm had come up, waterspouts kept forcing us to change course, so we headed towards Durban and then turned up-coast in order to find our landing area on Lake Umsingazi.  Late that night we sighted the lights of the flarepath on Lake Umsingazi and came down on our final approach. The thunderstorm was still raging with high winds, very heavy rain, hail and great flashes of lightning that lit the sky around us.

The Sunderland was about 60 feet off the water when for no apparent reason we dropped onto the surface, hitting very hard. We bounced, then hit the water again. I fly privately now but in those days wind-shear was a little- understood factor.  Our pilot, Capt Naude, rammed the throttles open to abort the landing and go around once more, but at about 100 feet the Sunderland stalled under full power and crashed into the lake. The nose was partially broken off, the co-pilot Lt Col Thys Uys was flung bodily through the cockpit canopy and landed almost 200 yards away. Capt Naude’s harness snapped and he was flung back-first against the instrument panel, injuring his back. I was seated in the wardroom below the flight deck with three other crewmen and was catapulted against the bulkhead ahead of us and knocked unconscious. Two of these crewmen were the only fatalities. I came to a few minutes later underwater and in pitch darkness. I found some air trapped above me and, after taking a deep breath, swam back through the wardroom into the galley – there I opened a hatch that led to the flight deck, but this was also under water. There was a small perspex dome used by the navigator just aft the main canopy. I found some air trapped there and this gave me a few more gulps.
Acting more on instinct I swam along a passageway to the weapons deck intending to exit the Sunderland through one of two machine-gun hatches situated on either side of the fuselage just aft of the wing trailing edges. Some flame floats in this compartment had ignited and the interior of the compartment was aflame so I swam underneath the flames to get to the left hand hatch. The rest of the crew were sitting on the left hand wing and Jan Knoll, a Dutch radio officer, heard me yelling. He had been in the wardroom with us and had swum out through the galley and through the viciously sharp tangle of wreckage where the nose had been. He jumped into the water and helped me out, swimming with me to the wing where my friends pulled me up and out of the water. They battled to pull me up because a hook on my Mae West buoyancy jacket had caught on the wing trailing edge. All their pulling was pretty painful! I passed out from the pain of my injuries – I had broken both ankles – and only came to briefly on the boat taking us to shore.

We were given first aid and bundled into the back of 1947 Ford ambulance that bounced its way across a terribly rough track to the Empangeni Hospital. Both my feet were dangling off the end of the stretcher and were being mercilessly bounced up and down. One of the medics realised that I was in agony and they shifted me up a bit. At the hospital they cut off our flying suits and gave us another thorough wash! We were later flown to Durban and spent a few weeks recovering in Addington Hospital before being flown to Cape Town in another Sunderland,” he told me. 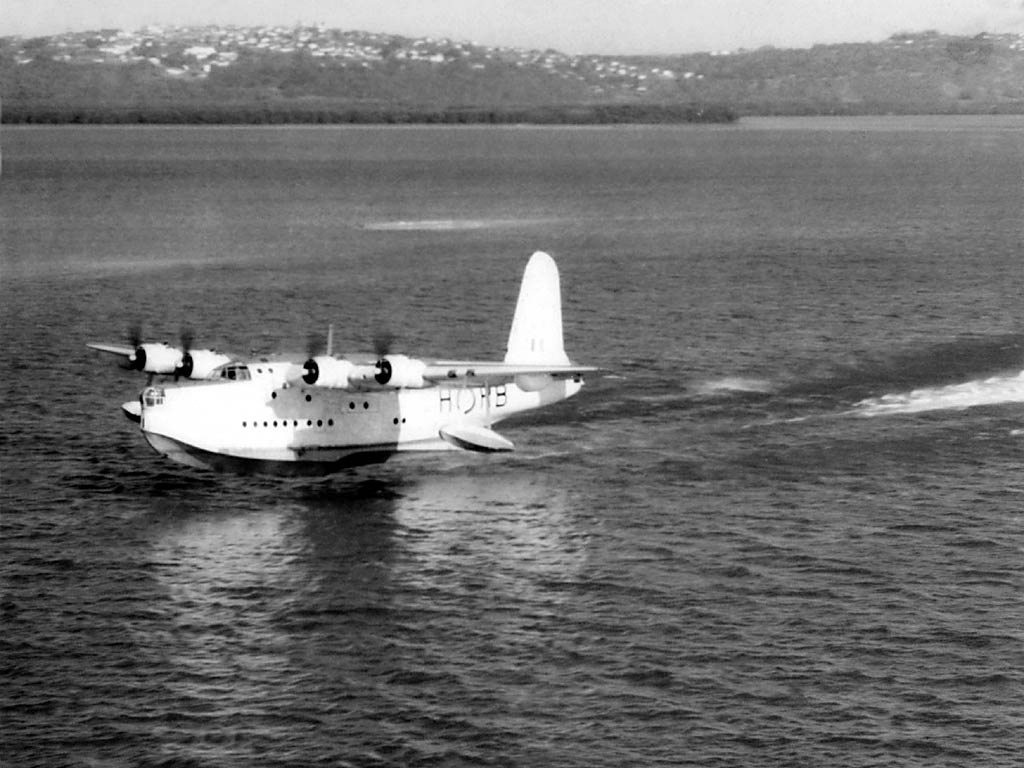 Richards Bay in those days was still very wild and the bodies of the two men who died in the crash were only recovered some days later because crocodiles were nosing around the wreck and keeping the divers away. Thys Uys was a bit of a legend in his own right having being involved in the attempted rescue of the survivors of a wrecked ship, the Dunedin Star, on the Namibian coast in 1939 flying a Ventura.
As a boy I saw the stripped  hull of the Sunderland being winched out of the Lake Msingazi in about 1958. Only recently have I found out that full salvage was not possible and the hull was let slip back into the lake.  A local man salvaged the right hand wing float at that time and converted it into a catamaran ski-boat powered by an old flathead Ford V8 engine and with one of those domed Perspex cake covers usually found in a Greek tearoom as a canopy. This contraption, looking like something from Startrek, actually went out to sea and must still be in the area somewhere!
The natural beauty of Lake St Lucia and Umsingazi has hidden this story for many years.
To the average visitor today the thought of those beautiful lakes being the scene of such amazing military aviation activity would be strange – but these events are a part of the fascinating history of Zululand and definitely part of the aviation history of South Africa. 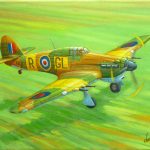 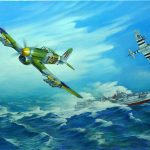 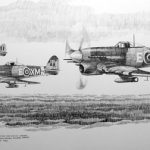 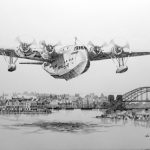 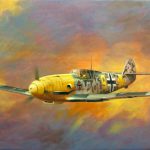 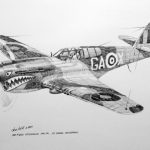 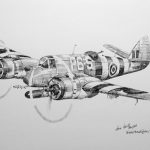 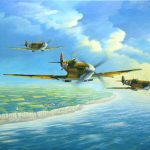 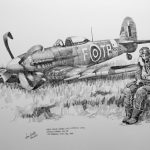 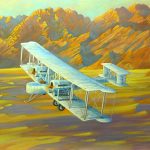 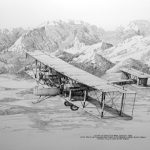 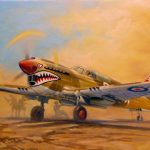 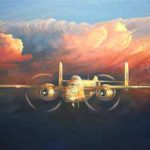 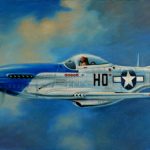 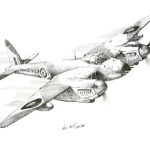 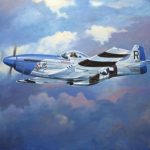 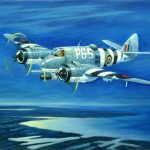 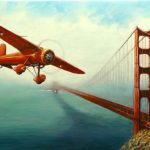 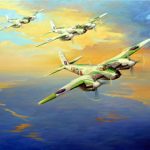 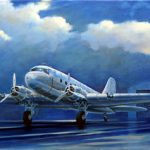 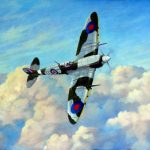 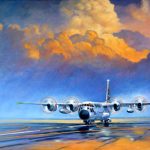 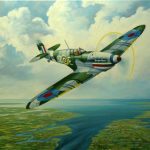 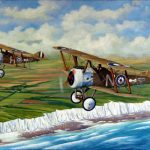 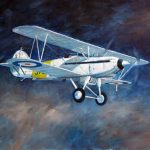 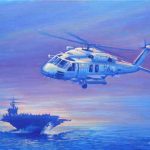 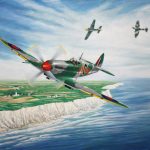 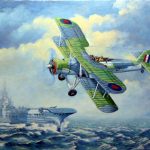 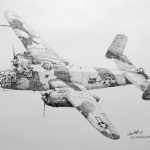